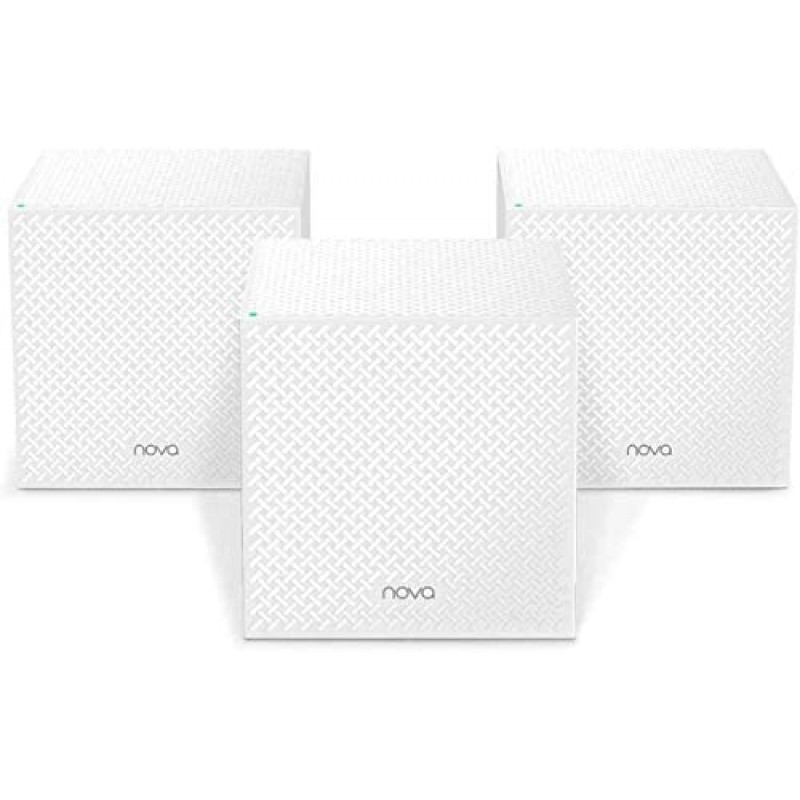 Three-band wireless WiFi Mesh system to cover the whole house. All three parts of the system (nodes, satellites, modules) communicate with each other and each creates additional wireless coverage of your house. All satellites communicate simultaneously in the 2.4GHz (300 Mbps) and 2x 5GHz (2x 867 Mbps) bands, with a total WiFi speed of up to 2100 Mbps. Thanks to the ring communication, much higher coverage and stable speed are ensured than, for example, the WiFi router solution with extenders. In addition, the WiFi network looks like only one (single SSID), you no longer have to switch between several networks. The individual satellites automatically switch your terminal device according to where you are, without any downtime or your perception. E.g. When making calls over the Internet, you can move freely between the floors of your house, around the garden, and the individual satellites switch your mobile phone to each other so quickly that there is not a single outage or interruption. In addition, it is possible to purchase additional satellites and thus increase the network coverage up to 2400 m2. The maximum is a total of 12 satellites.

WiFi system for complete and stable coverage of the whole house. There are 3 satellites in the basic package and it is possible to buy more to increase the coverage of the system, a total of up to 12 satellites in the network. All satellites in this system are interconnected and form a single network. For higher speed and stability, all satellites provide wireless three-band communication at 2.4 and 2x 5 GHz, so it will not be a problem to connect all WiFi devices (tablets, mobile phones, TV, etc.). Each satellite contains four internal antennas (3 dBi each) as well as three Gigabit LAN ports for connecting other devices by wire (NAS server, printer, PC). Completely uninterrupted signal of a unified WiFi network with a huge coverage of up to 600 square meters with 3 satellites. Coverage 2400m2 with 12 satellites.

Tenda MW12 is a new Mesh system for quality WiFi network coverage. It has a WiFi speed of 2100 Mb/s, and is designed to cover up to 2400 m2 of houses/apartments. With support for IEEE 802.11k/v/ra roaming protocols, Mesh IEEE 802.11s supports automatic network optimization and automatic routing selection, allowing you to enjoy a more stable and flexible wireless network.

Support 2.4GHz and 5GHz at the same time

There are several advantages to using both bands. Ideal distribution method: - 2.4GHz: web browsing, file downloads, emails, etc. - 5GHz: Online gaming, HD video streaming, especially applications where latency is important. The 2.4GHz band is also very noisy in larger buildings or prefabricated houses, and so performance degradation to a lower level, so WiFi routers from the environment interfere with each other. When using 5GHz, you do not have to worry about this. Signal coverage is provided by a total of 12 3 dBi antennas (each satellite 4x 3 dBi).

Continuous video call while on the move

Thanks to Mesh technology, your wireless WiFi network will contain only one name and one password. No more as in the caseof extenders and other APs in the network. MW12 automatically transfers client equipment (phone, tablet, etc.) from one satellite to another without service interruption. The client device is thus always connected to a stronger satellite without downtime.

The 3 satellites included in the package are already paired together at the factory. All you have to do is connect the main satellite to the Internet with a cable and deploy other satellites around the house. Setting up a network to your liking is a matter of seconds.

Application for Smart mobile phones/tablets "Tenda WiFi", thanks to which you control and set MW12. The application is in Czech. For example, you can allow WiFi to visit, block some users, set up WiFi, and support parental controls. Furthermore, performance settings, Upload/Download monitoring and other settings.

MW12 can also set up a network to visit the "Guest Network" for WiFi 2.4 GHz and also for 5 GHz, including the time the permit is to last.