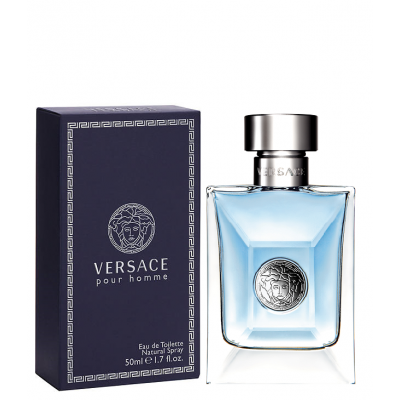 Versace Pour Homme is an intriguingly aromatic, masculine scent, taking its inspiration from the Mediterranean. The distinctive fragrance has top notes of bitter orange, bergamot, neroli and diamond citrus, whilst heart notes bring clary sage, cedar, geranium and a touch of blue Hyacinth. The base features accords of the oud tree, tonka beans, musk and mineral amber, creating a refined and aromatic finish.

Versace Pour Homme is a new fragrance and it was introduced in 2008. The nose behind this fragrance is Alberto Morillas. Top notes are citruses, neroli, bergamot and petit grain; middle notes are hyacinth, clary sage, cedar and geranium; base notes are tonka bean, musk and amber.

Super luxury, super Italian, super glamour! An Italian fashion label founded in 1978 by the late Gianni Versace (1946-1997). Combining rock & roll with fashion & red carpet status, Versace has always epitomized over-the-top sexiness and glamour. From the signature Medusa head, the Greek fretwork to the Baroque print, Versace’s iconic branding is universally recognised. Always with her finger on the pulse, Gianni's sister, Donatella continues the legacy by overseeing every collection created by the Versace house, from the luxe Haute Couture in Atelier to the cutting-edge streetwear in Versus. From fashion, to footwear, must-have bags, jewellery and even interior design, the brand’s resonance is in its chameleon-like ability to adapt and translate internationally. Donatella Versace personally oversees the fragrance development in line with her vision and the collection includes the stunning Crystals collection, the opulent Oud Noir and Oud Oriental and Eros & Eros Pour Femme inspired by the God of Love.